About the Famous Salem Oak

There is probably no historic site in Salem County better known than the Salem Oak. It has been celebrated in poetry and prose for over a century, and incorporated as a symbol of the county by both private and public enterprises. Unlike any other local landmark, the oak is a living reminder of the county’s history. Estimated to be 565 years old, this ancient tree is said to have shaded the Lenni Lenape, and local lore maintains that John Fenwick treatied with Native Americans beneath its branches upon his arrival here in 1675. What is certain is that the Religious Society of Friends, Salem Monthly Meeting, has owned the tree and surrounding property since 1681. This was the site of Salem’s first meetinghouse and is still maintained as the Friends Burial Ground. The Friends Meeting cares for the grounds and the tree to this very day. 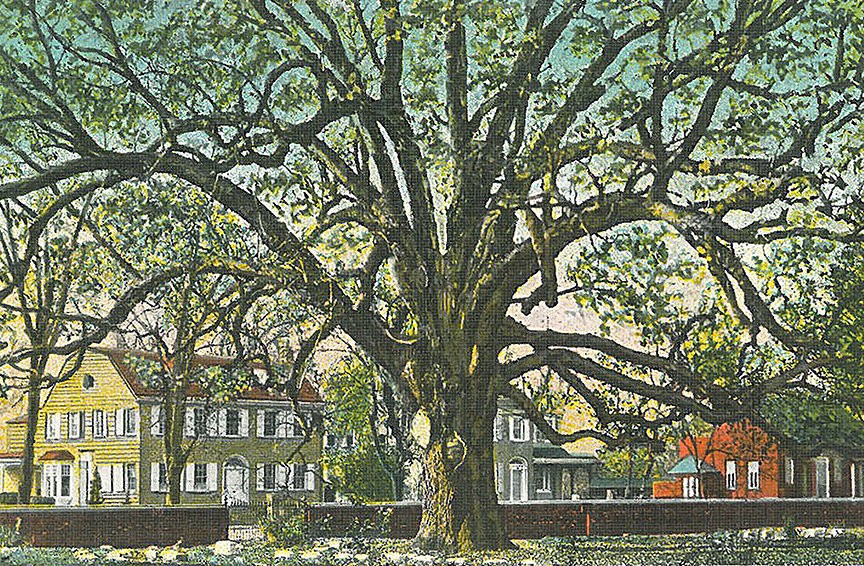 Since at least the 19th century the Salem Oak has attracted widespread interest and awe, even though it is not the largest or oldest oak in New Jersey. In 1876, for example, a sapling from the venerable tree was planted in the First Presbyterian Church’s cemetery on Grant Street. Known as the Centennial Oak, the tree survives and thrives today. Fifty years later, in 1926, three of the oak’s progeny were planted along George Washington memorial Parkway near Washington, D. C., as part of the nation’s observance of its sesquicentennial. The following year, Charles Lindbergh flew over the tree in the “Spirit of St. Louis” as part of a national tour five months after his historic trans-Atlantic flight and dropped a message for the citizens of Salem.

So revered is this tree that scarcely a branch or acorn touches the ground without it being gathered and preserved in some way. We know that souvenirs and commemorative items have been made from the wood of the tree for at least a century. These cherished objects are interesting for what they represent, like some relic that connects its possessor with the past in some tangible way. 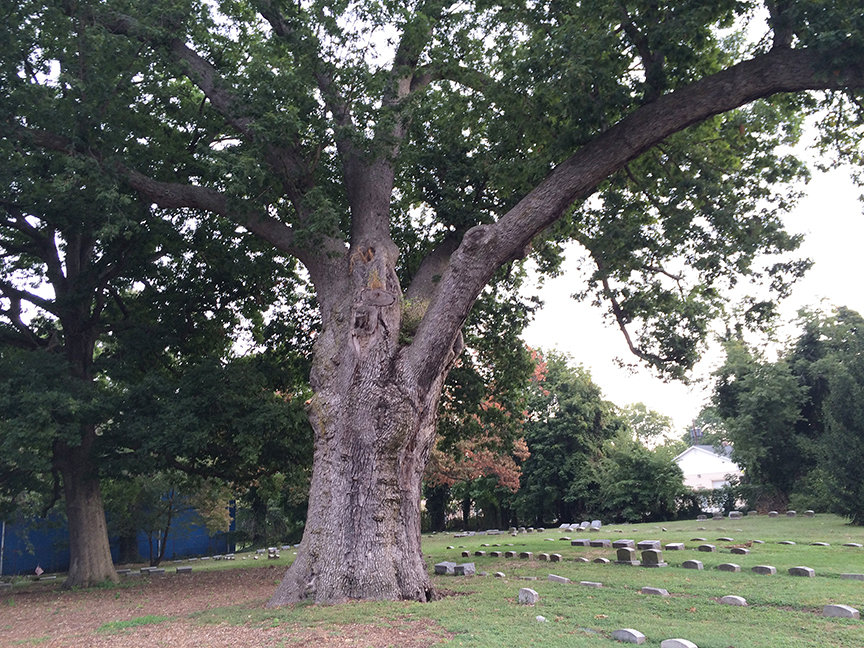 It’s taken several hundred years, but the mighty Salem Oak has made it to No. 1.

The landmark tree on West Broadway is now ranked as the largest white oak tree in New Jersey, according to the New Jersey Department of Environmental Protection.

But being ranked No. 1 in the state did come at a price. What had once been declared the largest white oak in the state in Freehold, Monmouth County, died last year, according to NJDEP Spokesman Larry Hajna.

“It’s been a central symbol in the area,” said Jim Waddington when hearing the news Wednesday. Waddington is a member of the Religious Society of Friends in Salem which maintains the tree.

He said the oak has long been a symbol of strength and integrity.

But age has taken its toll on the mighty Salem Oak. Located in the Salem Friends Burial Ground, it’s estimated to be somewhere between 500 and 600 years. 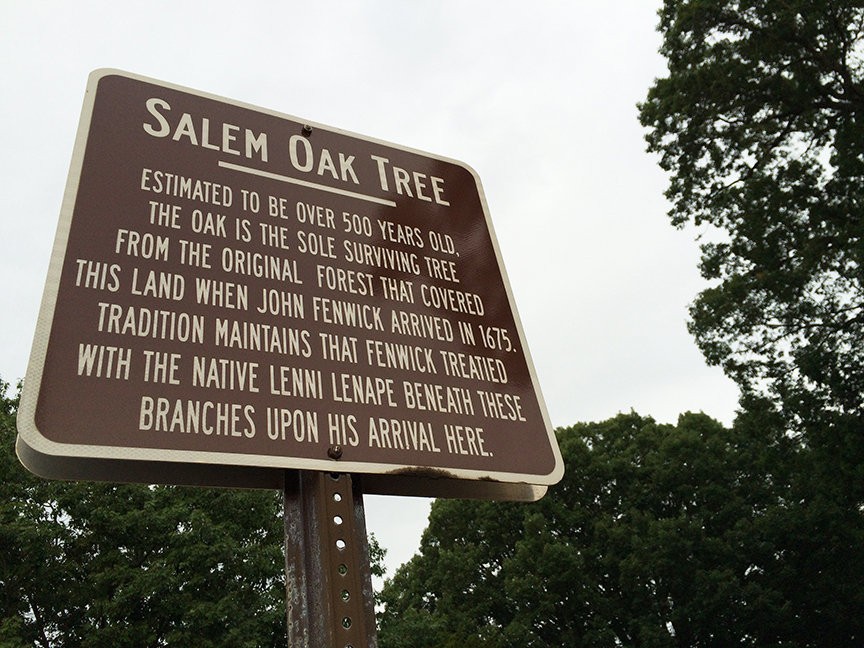 The Pennsylvania-based Davey Tree Expert Co. was hired to care for the tree.

“It’s an amazing beast,” said Jerome Ocker, a certified arborist with Davey during a visit to the tree last year. “Because of it’s age it’s definitely worth trying to maintain.  I don’t see why it shouldn’t last another 100 years.”

David Culver of the Religious Society of Friends who has been in charge of caring for the tree recounted last year some of the problems encountered in caring for the oak. One of the most major ones was the loss of three large limbs in 1999.

“We started pruning some limbs off to make it lighter and that has worked,” Culver said last year. “We also did some more wiring to make sure the limbs are supported.”

The tree is fertilized and cables help to support branches in place on the tree and anchor it to the ground. The tree also has lightning rods attached.

The DEP, on its list of largest state trees, has given the Salem Oak a score of 397 — a combination of factoring in its height (103 feet), circumference (22 feet, 4 inches measured at chest height) and size of its crown (104 feet).

The Monmouth County white oak which had held the No. 1 title until last year had a score of 408 points. It was 105 feet tall, had a circumference of more than 23 feet and a crown of 96 feet, the DEP said.

According to local legend, it was under the shade of the Salem tree that Salem founder John Fenwick made a peace treaty with the local Lenni-Lenape Indians. 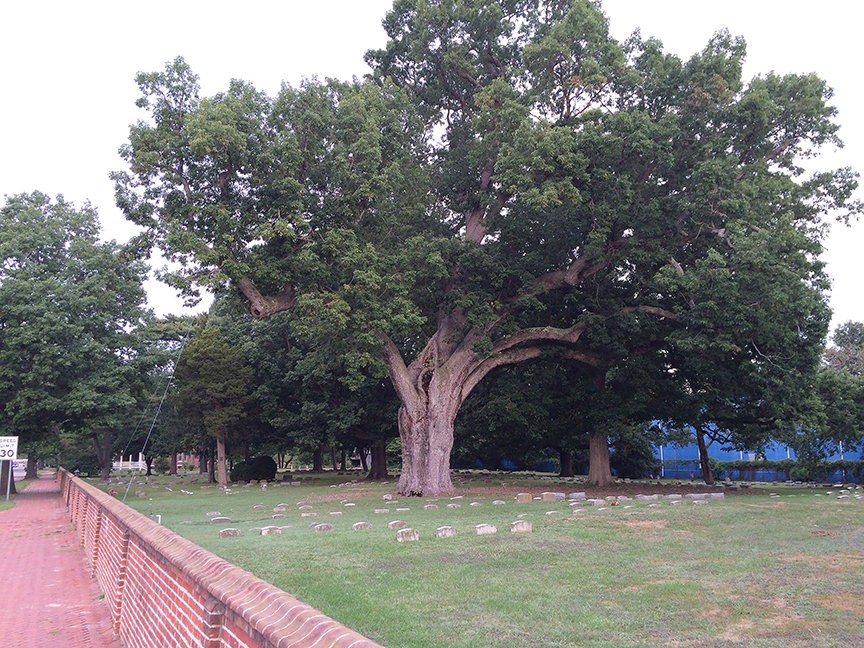 Under its outstretched branches are the graves of many prominent local Quakers.

If a tree could be considered a celebrity, in Salem County, the mighty oak would hold that title.

Locally, many things are named after the tree including the diner across the street, a real estate title company and even a winery. The chamber of commerce and the local community college incorporate it in their logo.

Offspring of the oak have also made their way around the country. In the Salem Presbyterian Cemetery on Grant Street is the Centennial Oak, a Salem Oak seedling planted in 1875.

The wood from the oak is also prized. Through the years as branches have fallen, they have been turned into commemorative pieces by local artisans. Everything from gavels, candlesticks and even canes are in private collections.

Its image has appeared on everything from postcards to plates.

The tree has been a witness to history, too. There have been countless ceremonies — including burials — in the cemetery in its shadow. On Oct. 21, 1927 famed aviator Charles Lindbergh flew over the Salem Oak on a trip from Atlantic City to Wilmington Delaware, as part of his triumphant tour of America after his solo trip across the Atlantic Ocean. 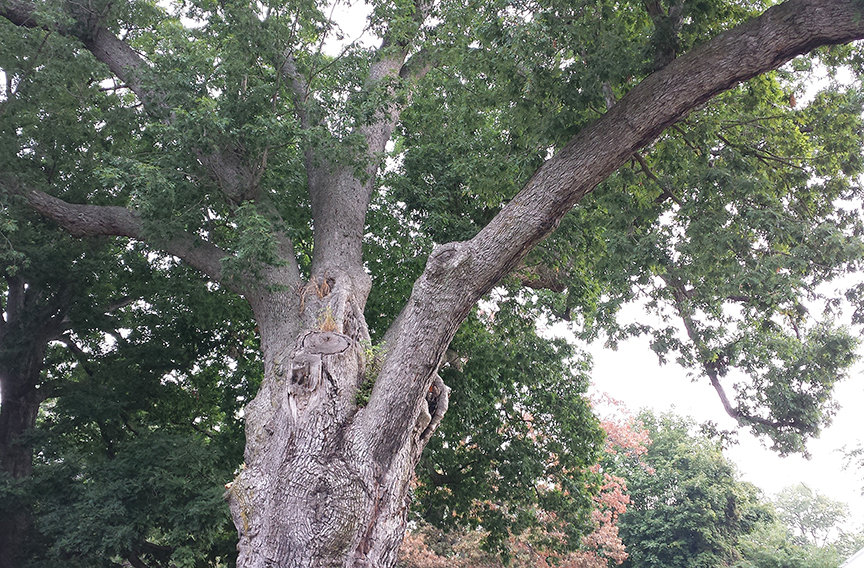 According to DEP records, the state’s second-largest white oak is now located in Sussex County and the third-largest in Warren County.

How much longer the tree holds the state record depends on its health.

Typically, white oaks can live to be 200 to 300 years old, something the Salem Oak has now far surpassed.

“None of us know how much longer that the oak has,” Waddington said. “It is an aging tree that has its own health issues.” 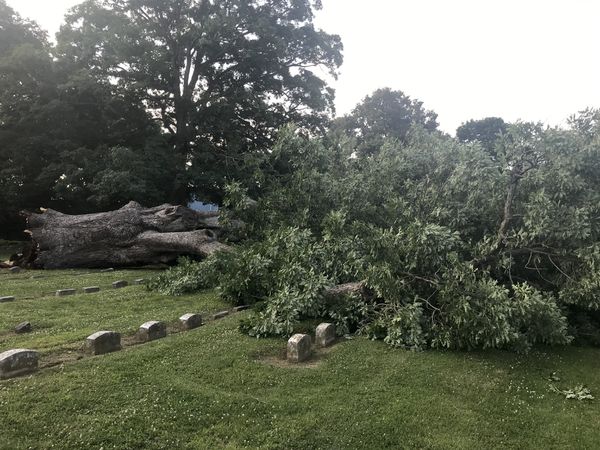 Connect – Communicate – Share
Find out what’s happening in Salem County
THE LATEST NEWS & EVENTS
We will never share your email. You can unsubscribe at anytime.