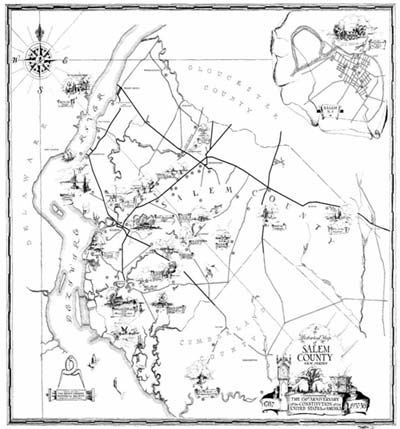 A Key to a Historical Map (Also see the guide to city and town names.)

Please note this is a large file of approximately 9.5mb, so please be patient while it downloads as it may take awhile on slower internet connections.

Fort Elfsburg: Beginning with an expedition that departed Sweden in 1637 or 1638, the Swedes and Finns (then part of Sweden) purchased land from the Indians on both sides of the Delaware Bay and River. Upon arriving they laid the foundation of a town and fort they named Christina, for the Swedish Queen, on the west side of the river.  At the close of the year 1640 or early in 1641 a settlement was established on the east side they called Elfsburg or Elsinborg.

Connect – Communicate – Share
Find out what’s happening in Salem County
THE LATEST NEWS & EVENTS
We will never share your email. You can unsubscribe at anytime.